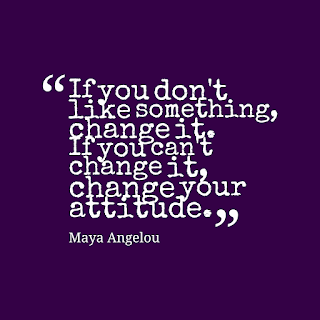 For the next year and a half there are many things that I just absolutely cannot change and I've really been letting it get to me this week. For some reason this semester seems like a more difficult adjustment for me to make than the last.

My schedule is completely different, my classes are significantly more difficult, I have a couple different professors to get used to, and I'm having a much harder time settling into a routine.

I find myself a lot more irritable and frustrated over so many things. I can't figure out how to study for my classes. My living situation is less than ideal in the dorms. I can't seem to get a good nights sleep (which definitely contributes to my irritability!) The fact that I don't have any income and can't balance school and work worth a damn. After a long day I can't lay down and watch Netflix or browse the internet because we can't get a good wifi connection in our room. That I have to jump through a million hoops with nearly every little thing I do. The list goes on.

Last night as I lay in bed for over 2 hours listening to loud bangs and the constant dribble of a basketball from the dorm above us I was livid. They've been talked to about it twice before and it's never helped, I was exhausted, I was unable to shut my brain off, and every time I drifted off to sleep I'd be woken up a few minutes later by a door slamming, a ridiculously loud bang from above and I'd have to start the cycle all over again.

All I could do was complain. All I've been doing is complaining. I've been here before. Many times. Sometimes when it seems like absolutely nothing can go right and all you can find is the wrong it's not necessarily your surroundings or your circumstances that is to blame. Instead it's your attitude.

We ALL have things we wish would change or circumstances that are less than to be desired. We can choose to be miserable or to make the best of the situation. It's like someone super special at DCH always says, "Think positive, not negative" with a big smile and thumbs up. I need to take that statement to heart right now.

I know that things with my classes will improve. They aren't supposed to make sense to me RIGHT NOW. That's why I'm going to school. My situations are only temporary. I'm so anxious to be done with school, move out of North Platte, figure out where I want to be, and start my career that I'm having a hard time enjoying the process and seeing the good, not the bad.

It's not easy but I've got to try. I'm tired of being miserable where I'm at and with the things outside of my control.
Posted by Nikki Jones at 12:15 PM 1 comment:

Even though I have begun to go stir crazy after my first winter break since being back at school, it has been so nice to be able to relax, not worry about anything, and enjoy being with my family! I am certainly ready to get back into a routine again and start spring semester. I know that it's going to be a tough semester, but I'm really excited to start getting into the specifics of MLT classes!

This semester my schedule is pretty flexible with only a couple classes a day. I am done with classes by 9:15am on Thursday so I have a lot of time to study and if it allows, have a longer weekend break! Unfortunately I have to take Chemistry 2 & lab from 6-9 at night one day a week which I'm not at all looking forward to, but otherwise I really can't complain about my schedule!

For MLT we are diving into Hematology and Serology. I am also taking psychology online, chemistry, and Anatomy and Physiology. Looking forward to all my classes minus chemistry. It was my toughest class in the fall and I struggled to pull an A out of the class. But I'm going to stay optimistic about Chem 2 and aim for an A!

During the first part of my break I spent about a week with my family. We celebrated my sisters birthday on the 16th and then I celebrated my birthday on the 20th with my family. I spent my actual birthday with Josh on the 22nd. He took me out to eat at the Loop (Fun Fact: Where we had our first date!) and he got me an awesome coffee table book about the top 100 musicals which has been fun to flip through when I've been bored. He also got me the cutest stuffed sloth that we named Seymore! It's been fun, Josh takes pictures of him doing silly things in the morning before he goes to work.... 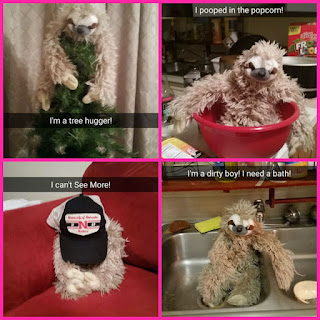 Josh spent Christmas Eve and Christmas Day with my family and a good time was had by all! Christmas Eve day we spent with my mom, dad, and sister at the house playing games, eating food, and visiting. That evening we went to my grandmas, as is tradition, and enjoyed ourselves among lots of food, punch, and gifts, and family. 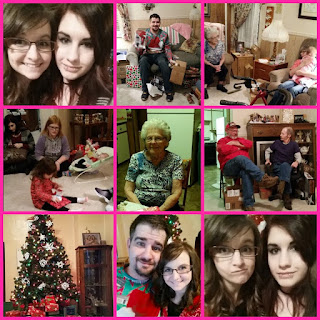 We did something different this Christmas and had a mini photo booth with some props. Turned out to be pretty fun and my sister got some nice shots! The following pictures are credit to Shayna! 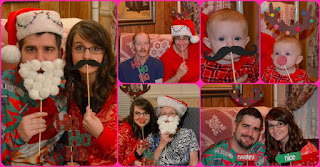 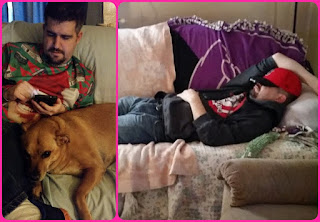 Christmas Day was spent with my mom, dad, and sister at the house. We opened up our gifts which was so fun to see each others reactions, played around with them a bunch and played several games. Josh made friends with the dogs and we got to relax and just enjoy the day.

We spent several nights at Josh's parents cabin and got to spend time with his parents. We all watched the Husker bowl game, which ended up not disappointing like we thought it would! The cabin and time with his family was very enjoyable and relaxing, but going to the bathroom outside in an outhouse at 3am with subzero wind chills is not our idea of fun, so we were ready to get back home and relax with each other after being with family for several days in a row =)
On New Years Eve Josh and I went to a small party with some people that he knows and had a pretty good time. I enjoy meeting some of the people he spends time with and getting to know them. We left around 10:30 as we were both really tired. After we got home we played Words with Friends (Our normal!) and saw the New Year in. Just a few minutes later we went to bed and crashed hard! 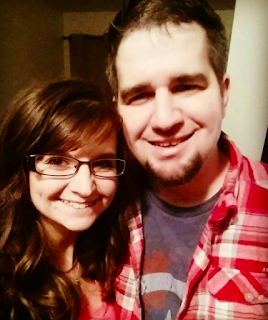 Josh had to return to coaching wrestling and shortly after returned to work. I went to watch wrestling a couple of times over my break; a triangular in North Platte and then a JV tournament in Gothenburg. I'm certainly getting it down. I think I hit a wrestling milestone in Gothenburg as I finally got excited enough, and understood enough, to cheer them out - out loud! I enjoyed going to cheer them on.

We also had to jump on the Star Wars bandwagon! We went to the movie and LOVED it! I'm super excited to see what the next one brings! Josh and I also watched Ant Man, which I really liked, and then I asked to watch more of the Marvel movies as I've really enjoyed each one I've seen. We watched Guardians of the Galaxy which made me excited for the next one that will be coming out! We also watched Jaws, Josh's favorite movie. He was blown away I hadn't seen it before!
I move back on campus tomorrow afternoon and start classes on Monday. Here's wishing myself attentiveness, motivation, and patience throughout this semester!
Posted by Nikki Jones at 6:59 PM No comments: