Even though I don't post a lot in my blog anymore, I still like to try to reflect on my year and oh what a WONDERFUL year it has been! Honestly it's probably one of the best years that I've ever had.

January marked the downhill slide of schooling for me. I started my microbiology clinical rotation in North Platte and finished the rest of my rotations in McCook. Being in McCook allowed to me finally officially move "home" and was the first time I was able to live with Josh full time. Previously I was able to come home on the weekends, so it was such a nice change to spend more time with him. Clinical's were tough and required a lot of time but the end was near at the beginning of May!

The last week of school was intense. We had a couple of exams to take every day, a paper to write, resumes to complete, study questions to do, and a final exam over a random 500+ questions. To say it was a relief to be done with it all is an understatement!

I am so proud to say that I came out on top and graduated the MLT program with my associates degree AND the 4.0 GPA that I had strived for the entire 2 years! I proved to myself that not only do I have the ability to stick with it even when it seems impossible, but I'm able to do it above and beyond what I ever expect! This was a huge milestone for me and it'll be something that I'll always look back on and never regret. I'd like to say I'm DONE with school - but never say never... I may get the itch to get my bachelors one of these days. Yikes! 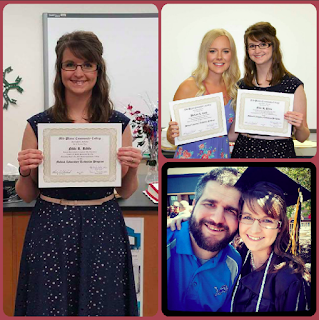 I took the weekend after graduation to relax, regroup, and prepare to hit the books incredibly hard for the next week. I scheduled my ASCP board exam a week after graduation. I wanted to do it while the material was still fresh in my mind. I also didn't want to drag it out too long because I knew the longer I waited, the more I'd freak out about passing... I was already nervous enough! That Monday I crammed like crazy for the next 5 days studying everything I could possibly know about microbiology, blood bank, hematology, urinalysis, immunology and everything in between. Early mornings and late nights led to exhaustion but it was ALL worth it!

I took my test on Saturday morning before heading to Lincoln for a couple family birthday celebrations. Taking that test was one of the hardest things I've done! I nearly had a panic attack a few different times after beginning it and I had to excuse myself about 20 minutes into it just to regroup and reassure myself that everything was okay, regardless of the outcome. I remember thinking the entire test that there was NO WAY I was going to pass. It was HARD and I kept getting the questions I least prepared for.

After answering the final question I had to take a few minutes to compose myself. I clicked through the next few screens and started to shake. The moment I hit the button that would preliminarily tell me if I passed or not I swear my heart just stopped. It seemed like minutes passed before I saw the word "PASS" come across the screen! I started shaking even more and I got the biggest smile on my face. I DID IT. It was finally over with. I was official. I was so giddy the next couple of hours, I couldn't get over how amazing it felt!! 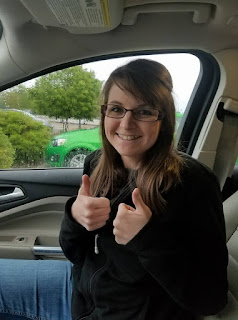 But once the adrenaline wore down I was so exhausted and while the time in Lincoln was very fun, I couldn't wait to get back home to get some well deserved sleep and relaxation.

However there wasn't a whole lot of time for relaxation because the first part of the next week I finally started my first "big girl" job as an MLT. I had a wedding to pay for and desperately needed money as my savings had completely run dry. It's awesome working alongside with my mentors and those who encouraged me to go back to school to advance my career. I've learned SO much since becoming a tech and I'm excited to see where it takes me in the future.

Shortly after graduation Josh's aunts threw me a wonderful bridal shower! It made everything feel so real and I felt so special and loved that day. Josh and I got wonderful gifts and the place was decorated so nicely. So many details put into the decorations.

My mom, Tina, and Karen also threw me a small bridal shower. It was so thoughtful and really enjoying spending time with those close to me! 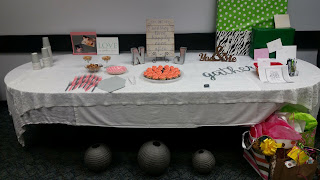 In July my sister-in-law, Beth, threw me a bachelorette party and holy cow was it fun! It was a small family affair as just my mom, Beth, and mother-in-law, Rita were able to go, but it turned out perfect! We went to Lincoln and met up at Corky Boards. We each picked out a design and painted our own signs while enjoying some wine and music. I would LOVE to go back sometime, I really enjoyed it! 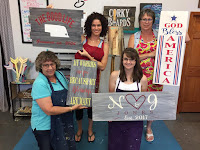 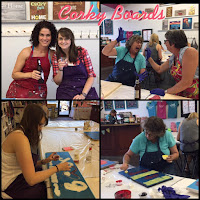 We then went to our hotel and enjoyed snacks and drinks during happy hour while we had a chance and then went to our room, played a few games, and took some fun photos of which most I probably shouldn't post. 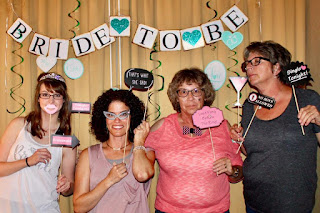 The night ended with food from Buzzard Billys, drinks from various places, and a nice big slushy from the Rail Yard to close it all out.  So thankful that Beth planned such a fun time for me! 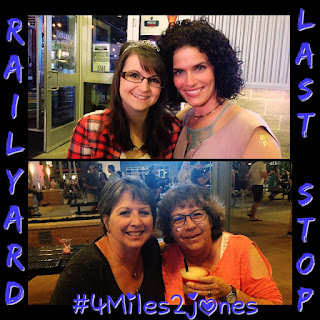 Then brings August - probably the BEST month of the year. On August 12th Josh and I got married! I need to do a blog post just about our wedding day, so I won't get too long winded here. But I will say it was such a perfect day. One of my best friends flew in from Utah, against all odds, to help me through the days leading up to the wedding and she was a God send! I honestly would have lost it if it weren't for her and those days wouldn't have been very enjoyable for me. But the day of everything came together so perfectly; I had my girls by my side, the weather just barely cooperated, and I married my best friend. 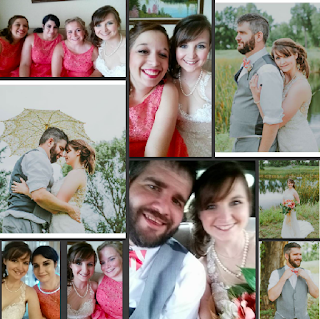 The Monday after we tied the knot Josh had to return to work so we didn't get the chance at a honeymoon right after. But we did plan a small one in September and it was wonderful! We stayed in Omaha for the first 2 nights. The first day we went to the zoo and spent roughly 7 hours walking around, feeding the giraffes, taking the skyfari, touching the sting rays, eating zoo food, and getting sunburnt. I have to say that the best moment at the zoo is when I discovered a SLOTH! These are by far my favorite animals. I got so excited I cried. 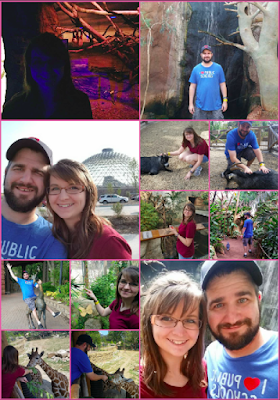 The second day of Omaha we explored downtown and ate at some good restaurants. I tried my very first oyster at Shucks, I can't say I'd order it if given the opportunity but it wasn't bad. On the way to our next stop in Lincoln, we stopped at the outlet malls outside of Omaha and shopped for several hours - a well deserved treat! He was such a trooper letting me shop until I dropped.

The next two nights were spent in Lincoln. We went to the Rutgers Husker game, walked around the Haymarket, ate at Rodizio's and Buzzard Billy's, and Blue, and overall had a wonderful time. The game was miserably hot so I didn't enjoy it as much as I could have, but it's become a tradition for Josh and I to go to one game a year. Thankfully we WON this game and we're exited to go to one next year with the new head coach! 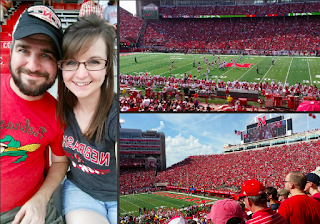 To end September we added a new addition to our little family and gave Loki a feline companion. We adopted Thora and she's been so much fun to have around. She is certainly a little terror at times, but she is also the sweetest kitty and loves snuggles. Her and Loki get along so well and can't be separated. 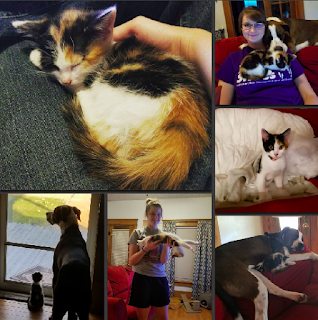 In November I did about the most adult thing I feel like I've ever done - I bought a brand new car! I've been needing a car for quite some time. My old taurus just wasn't liking to start up in the cold temperatures and since I drive so much to and from work, I was really needing something reliable. I had driven a friends Honda Fit a few years ago and completely fell in love with it. Josh went with me to Janssen Cool Honda and we test drove a few different models. He agreed with me that the fit just had that perfect feel to it and the price was more than right! I didn't walk in there planning to buy, but everything fell into place that day and I drove home in a brand new (only 60 miles on it!) 2016 white Honda Fit, appropriately named Wanda. I LOVE it so much and I am so, SO proud of myself for being able to finally buy something! I am so appreciative of Josh and his support! 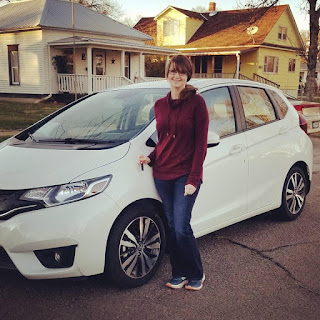 2017 didn't come without challenges, as most years don't. But this has been a hell of a good year for me and I am so excited for 2018. Another year of chances, opportunities, and moments to cherish. I really don't know what the upcoming year will bring - I have hopes but no big plans, so my goal is to just roll with what I'm given and to make the best of it all.
Posted by Unknown at 10:47 PM No comments: