Where everything is said in silence because the emotion behind what we really want to say is just too overwhelming to form into words....

Posted by Nikki Jones at 9:08 PM No comments:

In light of all the crap that's going on with my health and my financial situation, I wanted to focus on some of the more fun things that I've been enjoying lately!!


There has not been a song that Eclipse has covered that I haven't liked just as well as, if not more than, the original!! I am impressed and I love me some A Cappella!! 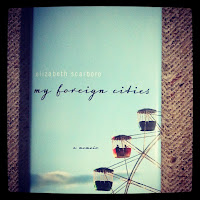 I fell in love with this memoir of a young couple striving to enjoy life the best that they can despite the knowledge that Liz's husband, Steven, has Cystic Fibrosis. I laughed, I cried, and I related. A review of this book will be coming in a future blog post =) I've started on it, just haven't finished.

I have always loved Jodi Picoult! The last book I read of hers was "The Pact" and I knew that it'd be hard to top, I got hooked! This one has started out a little bit slower for me, but I'm quickly getting drawn in and I'm anxious to see what happens!

I can't get enough of this show! I discovered it on Netflix and each and every episode makes me laugh more than once! Give it a shot!! :)
My sister has gotten me addicted to The Walking Dead! I am about ready to watch season three with her when we get back to Kansas, but I am itching to know what on earth is going to happen. There is so much going on I can hardly wrap my mind around it!! I didn't think I'd like it at first, but after staying up into the wee hours in the morning watching it with my sis, I'm hooked! 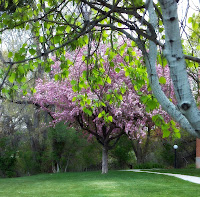 This tree outside of the condo complex has the prettiest pink! It didn't last for long, though. It's now mostly green with leaves! 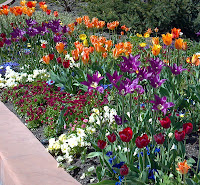 I went and walked around temple square for a short while. The flowers there are beautiful and I couldn't get enough of them!!

This is one of the first rainbows I've ever seen that I could actually see each color that you're supposed to. You can't quite tell it from this picture, but it was so bright! As it continued to rain another rainbow appeared right above it.

I've only played Mexican Train with them once, but it was a lot of fun! David, Heber, and I outlasted everyone, and to my memory, I won! :)

The standard game for game nights with my brothers is Settlers Of Catan. This is the last time we played... Super settlers! We combined two sets and played a massive game which turned out to be a lot of fun!!!

I've had a lot of time on my hands since I've been so sick lately, and these are just a few of the things that I've been enjoying. I've also spent some time with my friends Adam and Christine playing the Wii, board games, and having a BBQ. Mary and I have had a lot of fun eating pie at Village Inn for our designated "Pie Day". I've spent a ton of time trying to re-do the RiddleOfCF website to incorporate the new logo. And I've also spent tons of time resting and sleeping and trying to get through each and every day.

I'm trying to get everything that I want to do done before I move. Proving to be a challenge but I hope I'm able to see everyone and cross a few things off my list within this last week that I'm here =)
Posted by Nikki Jones at 11:58 PM No comments: